Sometime before the 10th of October 1868, thirty Police Constables signed a petition which was submitted to the Inspector of Police. He in turn forwarded it to the Liuetenant Governor, who in the absence of the Governor, was the head of the Government in St. Kitts at the time. This petition and the accompanying letter have yet to be found. We hope that they still exist in copy form in one of the volumes of Correspondence.

The second request was granted but they had to be back in town the following morning by 7.00am. Sounds fairly easy today but in those days, people walked or hitched rides on carts. Both could be quite slow which meant that somebody caught out in St. Paul’s had to leave wherever he was very early in the morning.

The first request was rejected outright because the perception of the people at the time was that the constables lacked zeal for their work and that too many robberies were happening with impunity. The people complaining were merchants. Without excusing robberies, one has to keep in mind the big social disparity of the time and the fact that people often had difficulties making ends meet. There were few alternatives to plantation work and no minimum wage at the time. Planters wanted the working population dependent on the meagre wages that they paid so that they would show up regularly.

And then we have the constables! This letter suggests that more research about the history of the Police force needs to be done. Meanwhile we will take a brief look at the implications.

The Liuetenant Governor considered the one day a month to visit family enough. This raises the question, what kind of home life did they have, and where were they living? It is obvious that the Inspector of Police understood the men’s request or he would have discouraged them from writing the petition. The rebuke he received about discipline in the Force confirms this.

Office of the Secretary to the Governor

I am directed by the Lt Governor to acknowledge receipt of your letter of the 7th Instant enclosing a petition signed thirty police constables praying that they may be allowed two days in each month for the purpose of visiting their families who may reside at some distance from the respective police stations, abs also that the rule requiring the Patrol  to return to Basseterre at night might be altered and such Patrol be permitted to return to Town on the following morning.

With respect to the time allowed Policement to visit ther families viz one day each month, the Lt Governor is of the opinion that it is quite sufficient,  and therefore cannot extend any further indulgence in this matter.

The Lt Governor has no objection to permit the Policeman who goes into the country as Patrol, to return to Basseterre the next morning by seven o’clock.

The Lt Governor however directs me to take this occasion to observe to you that he is surprised that these Policemen should be asking for further indulgence at this time when the Public are complaining of a want of zeal and energy in the discharge of their duties; it is asserted by the merchants and other persons of standing in the community that robberies are to  be committed openly with impunity, and other complaints are frequently made that they are not discharging their duties to the Public in a satisfactory manner.

His Excellency fears that there is a lack of zeal and a laxity in the discipline on your part, as well as apathy on the part of the men generally or these complaints would not be as often made, and I have his command to impress upon you the great necessity of more rigid and active superintendence over the Force, than has been hitherto evinced by you as to inspire more confidence in it than at present appears to exist.

Acting Secretary to the Government 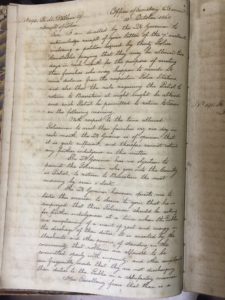 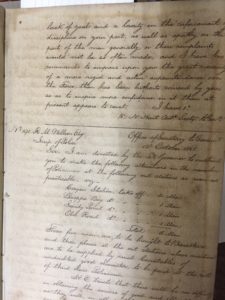