I came across this image by accident this week and it made me think of how much Basseterre has changed. It was taken in 1989. It shows the foundation of the old Court House in the foreground and the building which I believe was called Arrindells. It was soon after replaced by the concrete structure of Barker and Kelly’s supermarket and now houses C&C. We would be very grateful to anybody who can share more information on the building in the photograph.

From responses
A big thank you to all those who sent us info on the building in the photograph. The place was called Avondale. The ground floor was a pub/restaurant owned by a gentleman, a Mr Sheriff, who had lived in England for a while. The gentleman lived in the floor above the business. This sort of arrangement was once very common in St. Kitts and we can still see it in places like Astaphan’s on Church Street and Coury’s on College Street as well as in the several small shops of Irish Town. 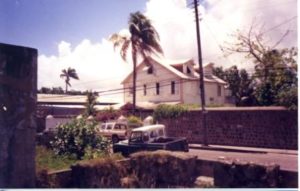