Your Excellency,
I claim to have influenced the removal of the records that I met in the cellar under the deceased Court House to their new quarters in the Administration Building Church St. Since the fire bundles of scorched records of current use have been piled into the already crowded archives rooms. What the fire did not accomplish, damp is now achieving, in the ill ventilated and crowded rooms. Mildew and mold have introduced themselves into vital records obliterating the entries at the bottom of volumes and spreading
Some weeks ago Mr Farrier told me his department was in contact with some one in England to come out and attend the records. While Nero is fiddling, mold is destroying. I feel insulted that someone has to be imported when I feel I can do as good a job as any.
I suggested to Premier Simmons over a week ago that the vaults should be left open as light is a deterrent to mildew, that lights be restored in the eastern vault that has been in darkness for over a year. Also the air conditioner in the eastern room not working – reported ages ago and nothing done to fix it.
I suggested to the Premier that as the policeman downstairs is on guard – he could see to it that no unauthorized person enter the open vaults – that they be only closed at days end. I asked the Premier to consider me as an applicant to the post of helper and I’d immediately attack the moldy and mildewed volumes. Since then I’ve passed by and see the vaults still closed acting in their darkened holds as agents of untiring mildew.
I went to the newspapers in the 30’s and the result was the removal from the damp court house cellar. Do I have to go the newspapers to challenge the obvious neglect in this instance? I pray your Excellency will influence the situation positively.
Sincerely
Your humble servant
Ed O Challenger

We share this letter today before we get too far into the Carnival season and serious matters are forgotten. It is an indication of how long the National Archives has been without a proper home. Edgar Challenger was once, one of the most frequent users of the records and was very conscious of their worth. We hope that over this past year we were able to raise some awareness about their value through this weekly email.
Challenger knew chemistry and therefore understood the effect of mold on paper and his suggestions for controlling it were correct. His concerns over the environment in the vaults remain valid to this day. As early as 1965, Clinton Black archivist of Jamaica warned the Administration that the vaults that were being built to house the Archives at Government Headquarters were far from adequate. The lack of air circulation and humidity are causing steady and irredeemable damage. Researchers need a place where the records can be consulted without being further damaged and a building needs to be able to hold records from schools, hospitals, ministries and departments and the old SSMC if today’s legacy is to be remembered as tomorrow’s history.
Best wishes for a great holiday season. 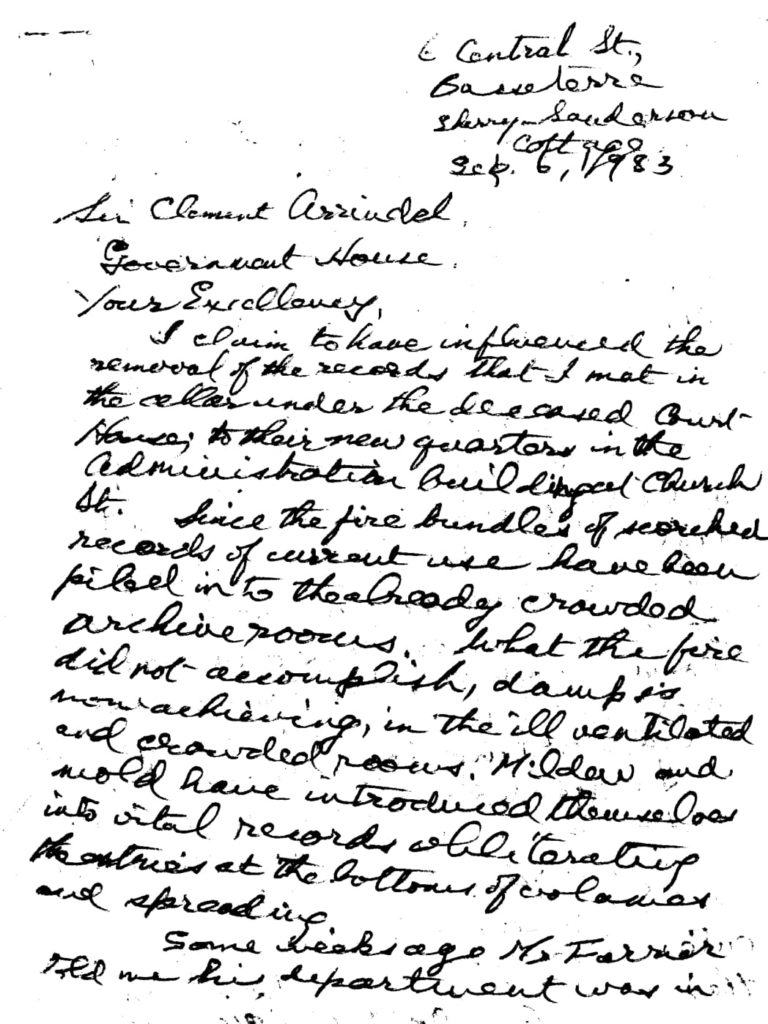