Our item this month is The Daily Express of the 22nd December 1882.   I have to thank three persons whose interest in heritage helped me realise the value of this particular newspaper issue.  First, there is Jeffery Phipps who asked me to to check the Daily Express for a project that he is working on. So far, I have not been able to help him find what he was looking for but one of the boxes that I opened revealed this item. Then there were Catherine and Lynda from Museumsand.org and the National Caribbean Heritage Museum in the UK.  One of the questions they asked me during their visit was, what did people do for Christmas before there was Carnival?  While going through the box, I realized that this was at least part of the answer.

So, before Carnival people had sporting events at Springfield pasture and did boat trips to neighbouring islands.  Of course, the trips would have been too expensive for labourers and it is possible that competing in the sporting events was costly too.  Races had an entry fee of 6d (pence). The donkey race cost a lot more. The greased pole and molasses dip were free.  We know what the greased pole is because we still see it every year at Easter down at the Bayfront.  But one wonders what the molasses dip was all about!!!

The races had a cash prizes – 20s (shillings) was the highest amount. To put this in perspective, the first-class cane cutters at this time had a daily wage of 6d to 8d.   For those who are interested in the old currency 12d made one shilling and 20s were equivalent to one pound. And according to an online inflation calculator, the pound in 1882 is equivalent to £114 today.

For the estate workers, there would have been the Neaga Business to enjoy on the street.  At this point, plays and skits were not censored so the performers could make fun of the elite of society to their heart’s content.  But no newspaper was going to announce these performances.

The newspaper carried social announcements and among them it records the sudden death of Jacob Mosquito. His surname suggests that he might have come to St. Kitts from Madeira.  He had either arrived on St. Kitts as a small boy or was born here soon after the first group of Portuguese workers arrived.  Civil Registration records show that he was married to Annie Francis, that they lived at Geagans and that earlier that year they had lost a child.  He was 27 years old at the time of his passing.  Annie must have been inconsolable!

The Daily Express consisted of one sheet.  At first it was only printed on one side with the back remaining blank.  It was produced by Richard Cable, whose family had long been involved in the newspaper business. 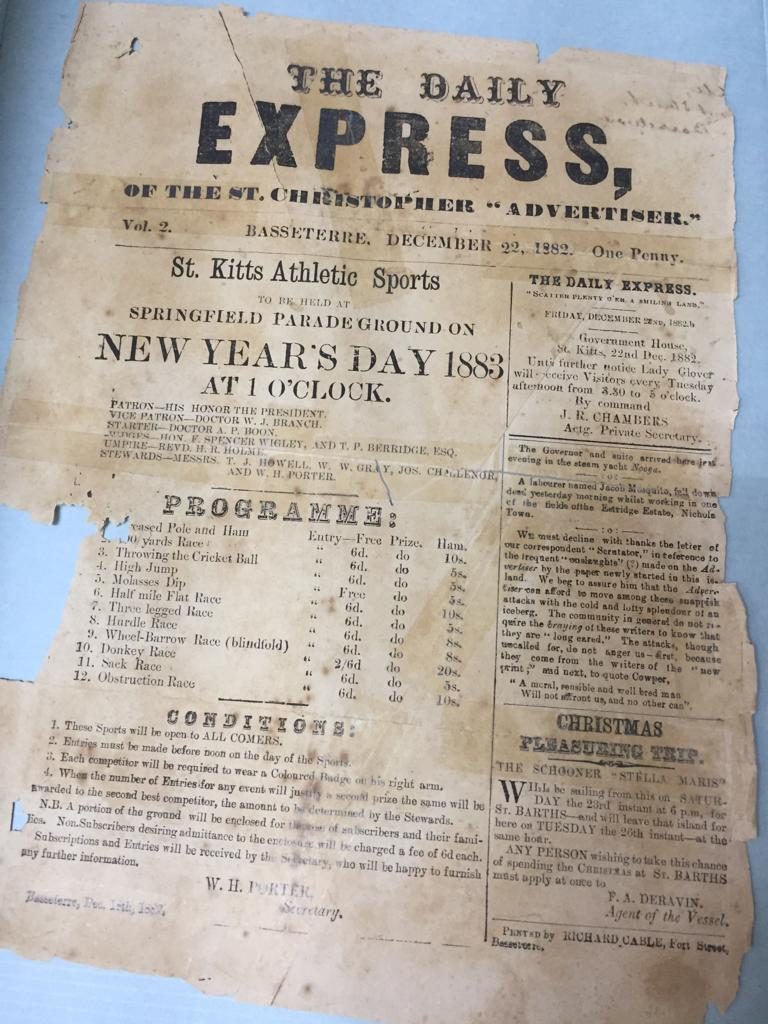