National Archives St. Kitts & Nevis > Gems of the Archives > Will of B Taylor 1943 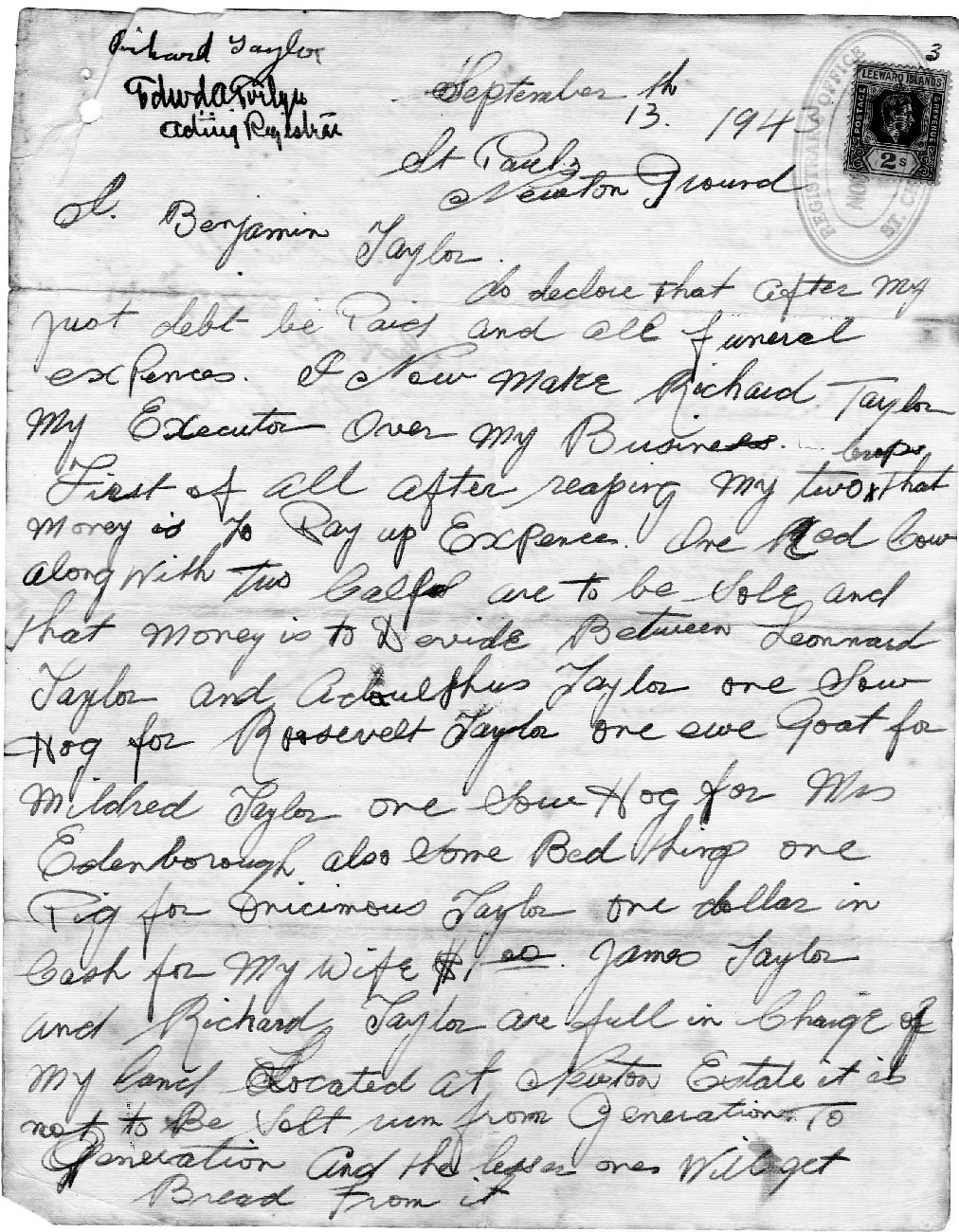 I Benjamin Taylor do declare that after my just debts be paid and all my funeral expences I now make Richard Taylor my executor over my business.  First of all after reaping my two crops that money is to pay expences.  One red cow along with two calfs are to be sole and that money is to devide between Leonard Taylor and Adoulphus Taylor one sow hog for Roosevelt Taylor one ewe goat for Mildred Taylor one sow hog for MrsEdenborough also some bed things one pig for Onicimous Taylor one dollar in cash for my wife $1.00.  James Taylor and Richard Taylor are full in charge of my land located at Newton Estate  it is not to be solt run from generation to generationand the lesser ones will get bread from it.  I also will this wood tenement to Richard Taylor and half of the furniture other half of the furniture to James Taylor.

Signed this thirteen day of September  1943

When you are trying to get a idea of what ordinary people thought and felt at a specific period of time, there is often very little to go on.  Archives tend to consist of the documentation of the rich and the powerful. Benjamin Taylor’s will is the sort of thing that social historians spend hours looking for.

Many others with Taylor’s social background – labourers, peddlers, domestics, laundresses  –  left wills but they often had them drawn up by lawyers and followed a formula common to most wills.This document  was written for Taylor by Samuel Edward Douglas, who seems to haveknown something about the format of a will but often abandoned it to follow Taylor’s instructions.

This is the will of a man who did not stand on ceremony and assumed that in his village everybody knew everybody else.The words “I give and bequeath to my dear son……” are nowhere to be seen.  Benjamin Taylor names his heirs but does not identify his relationship with them, except for his unnamed wife.  One senses that the marriage had not worked out.  Perhaps, the most striking part of the will is the value Benjamin Taylor places on his land.  It is not a purely monetary one.   He feels that having it has secured the wellbeing of his family.   He sees it as the family’s most valuable asset which should never be sold because it would feed everyone.

This will is in one of the 466 files containing  applications for probate or letters of administration for the period 1898 to 1945 catalogued and cleaned over the past two weeks.  They were among the material that survived the Court House fire of 1982.