Thomas Crooke to his mother Grace – Manumission
Saint Christopher Know all men by these presents that I Thomas Crooke of the Island of Saint Christopher free mulatto for divers good causes and considerations me hereunto moving have manumitted released and forever set free from Servitude and Slavery and by these presents do manumit release and forever set free from Servitude and Slavery my Mother who was formerly the property of John White late of the said Island Esquire and purchased by me from the said John White and commonly called or known by the name of Grace so that I the said Thomas Crooke my Executors and Administrators or any person or persons whatsoever may not and shall not at any time or times hereafter have claim or demand any property or interest in or right or title to the said negro woman commonly called or known by the name of Grace or to any of the future issue or increase of the said Negroe woman named or commonly called Grace or unto any Estate Real or Personal which shall belong to her or her future Issue and Increase but that I and my said Executors and Administrators shall be utterly barred and excluded therefrom and the said Negroe woman named or commonly called Grace and her future Issue and Increase shall be and remain as absolutely free to all intents and purposes whatsoever as any British subject or subjects.
In Witness whereof I the said Thomas Crooke have hereunto set my hand and seal this Eleventh day of November in the year of our Lord one thousand seven hundred and seventy two.
[signed] THOMAS CROOKE
Sealed and delivered in the presence of
[signed] WILLM. KELLY
Before the Honorable Craister Greatheed Esqr. Chief Justice of his majesty’s Court of Kings Bench and Common Pleas held in and for the said Island of Saint Christopher
Personally appeared William Kelly of the Island aforesaid Gentleman and made oath that he was present and did see Thomas Crooke late of the said Island free mulatto sign seal and as his Act and Deed deliver the within written Deed Poll or Manumission for the purposes therein mentioned and that he this Deponent subscribed his name as a witness to the due Execution thereof
[signed] WILLM. KELLY
Sworn this 16th day of November 1772 before me
[signed] CRAISTER GREATHEED

Today Emancipation day, 2015 we would like to share the personal emancipation of Grace by her son Thomas. The document was called a manumission, and it was acquired through purchase by the enslaved person or somebody who wanted to help him or her, as a gift often for good service, or through the last will and testament of the “owner”. Once acquired it was a document that had to be looked after as it might have to be produced to prove that the person was actually free in the eyes of the law. Manumissions were often regulated by law as some enslavers abused the practice by setting free a person who might have been too old or too sick to look after him/herself. Not all enslaved workers wanted them. Some found it safer to stay with an enslaver who had to provide the basics of life in a society that was full of insecurities. Some even where possible, preferred to find another “owner” if for some reason they were not satisfied with the one they had. Such a move required permission and was not a common move. The fact that some tried to use it, is an indication that the enslaved developed all sorts of ways of surviving the society in which they lived. 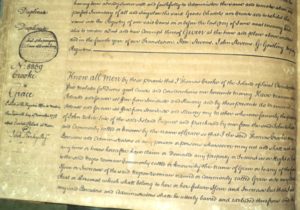 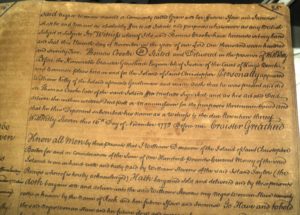