Journal for the Commissioners

National Archives St. Kitts & Nevis > Gems of the Archives > Journal for the Commissioners

Attached are two pages from the Journal for the Commissioners for the sale of the French lands 1726 to 1732. The Treaty of Utrecht 1713, gave St. Kitts to Great Britain. The French part of the island was considered part of the Royal Patrimony, which meant it as up to the King to dispose of it as he saw fit. A commission was sent to St. Kitts to deal with the matter. Their proceedings are found in a velum bound hand written volume that is 456 pages long. The Commissioners were to discourage very large holdings to ensure that the presence of English persons on the island would be continue but wealthy planters, some already absentee, found ways around this.

A number of people had claims that dated back some years and some had simply settled and started working the land in between military raids. Many of these persons who appeared before the Commission asked to be allowed to keep the land they occupied, even claiming that they could not pay for it.

The highlighted area of the two pages deals with a claim by John Africa. It says John Africa, a free negro delivered in a paper shewing he was possessor of about seven acres of land in the Conarees (in the Parish of Basseterre) near Half-Moon Pond whereon he has erected a small thactht house and planted about three acres in cotton and the rest in provisions, but being unable to purchase he petitioned the commissioners to remain in possession thereof gratis.

John Africa ended up buying his seven acres for £35. We do not have any further information about this man. He might have been an enslaved person who had been freedom but with such a strong name as John Africa, and his very obvious recognition of his African roots, one can more readily visualize a military person who had earned his freedom through service. 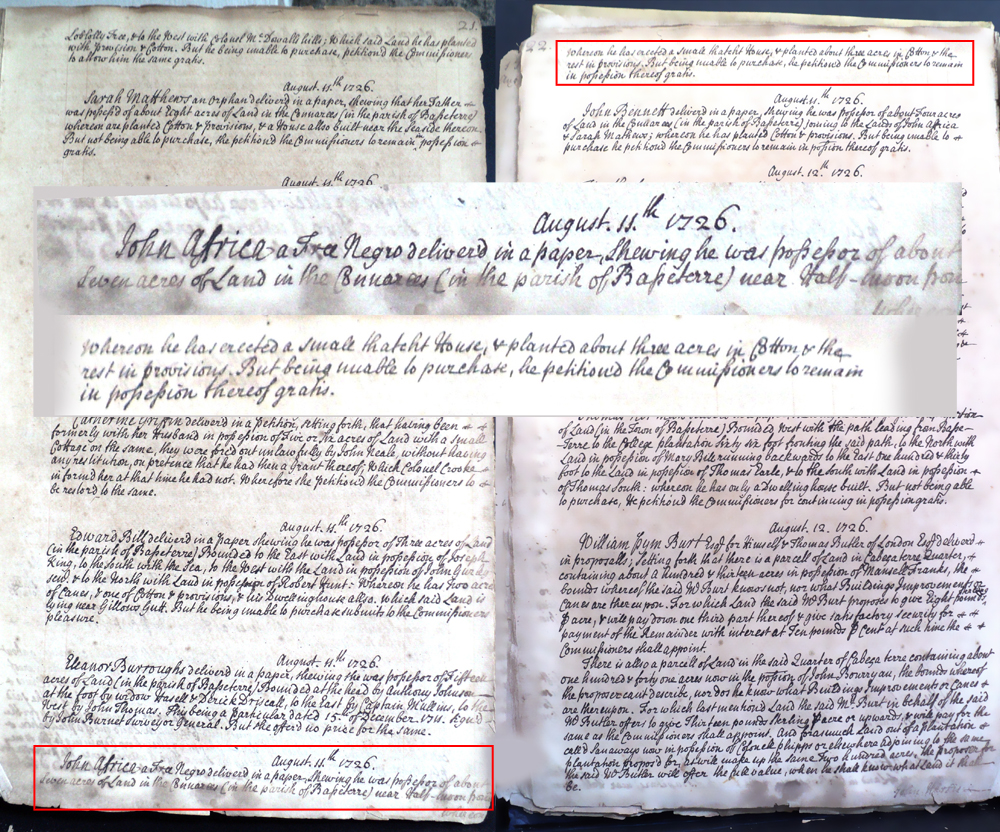