One of the questions we are often asked is “where were the enslaved buried?” For those who lived and worked on the estates the answer is usually on the estate itself. But there were a significant number who worked in private homes in towns and villages as servants, porters, and even skilled workers whose services were available for rent by anybody willing to pay the enslaver for the privilege. There were also those who were said to be “working out”. These were enslaved persons who were free to find their own work and negotiate a price for it and return to their enslaver once a week to give him/her the share of what had been made.

There were also persons of African descent or of mixed heritage who were free and had homes in the towns and villages. These persons often had no real rights, which probably meant that they were not buried in the church yards.

Today thanks to the continued assistance we receive from Ruth Case, we have the transcript of a document that points to one of the places where our black ancestors were buried. The document is the decision in a civil suit brought by Webbe Hobson against John Heale, a vintner or wine merchant for the settlement of debt. A house belonging to Heale was auctioned and purchased by Thomas Tuckett. The house was surrounded by Losack estate on the Eastern and Northern sides, by Nevis Street on the Western side and by the “negroe burying ground” on its southern side. Seaton Street had not been cut at the time of the document. This means that the cemetery was in the area between the Anglican Church Hall and the Methodist School room which at that time would have placed it just outside the church yard of St. George’s.

It will take more discoveries in the records and possibly some archaeological work to pin point the exact area but at least now we have confirmation of the existence of such a place and its general location.

To all to whom these presents shall come I Henry Berkeley Marshal of the said Island Send Greeting.

And Whereas at a Court of Kings Bench and Common Pleas held for this Island in the town of Basseterre on the ninth day of July last past Judgement was obtained against the said John Heale for the sum of one hundred and twenty eight pounds ten shillings and five pence current money at the Suit of Webbe Hobson of the said Island vendue[?] master together with a further sum of sixteen pounds two shillings and six pence current money for costs of suit upon which said two Judgments executions were issued to me directed which said executions were levied on all the Right Title and Interest of the said John Heale of in and to a House and Land situate in the town of Basseterre in the said Island and due publications were made according to Law for the time of the sale of the said House and Land

Now Know Ye that the said Henry Berkeley marshal by virtue of my office and as much as in me lieth and in consideration of the sum of Two Hundred and Eighty pounds current money to me in hand paid by the said Thomas Tuckett the receipt whereof I do hereby acknowledge and every part thereof to have received Have Granted Bargained and Sold and do by these presents Grant Bargain and Sell unto the said Thomas Tuckett his Heirs and Assigns all the Right Title and Interest of the said John Heale of in and to the said House and Land situate in the town of Basseterre as aforesaid and bounded to the East with Lands of Richard Hawkshaw Losack Esquire, To the North with Land of the said Richard Hawkshaw Losack, To the West with Nevis Street, To the South with the Negroe Burying Ground or unappropriated Land

To have and to hold unto him the said Thomas Tuckett his Heirs and Assigns to his and their own proper use and benefit upon which I the said Henry Berkeley have hereunto set my Hand and Seal this Seventeenth day of October in the year of our Lord one thousand seven hundred and eighty two. 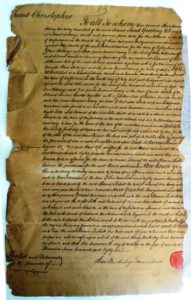