Electricity was made available in 1928 in Basseterre. Before that happened the Union Messenger spoke of official extravagance in its issue of the 10 Oct 1923. In a meeting of the Legislative Council of the 5th October, there was an item which earmarked £250 for the installation of an electric light plant at Government House, Victoria Road. Three unofficial members of the Council – Clement Malone, R Yearwood and P Todd – objected vehemently, calling the vote “a willful waste of taxpayers’ money” especially as the local government was already considering tenders for the lighting of Basseterre. The only unofficial member who did not object was Burchel Marshall who also saw it as a waste but having experienced the comforts of electricity, he felt he could not vote against the proposal.

Governor Eustace Fiennes was going to visit the island in November of that year for the Leeward Island cricket tournament. Perhaps Fiennes was aware that things rarely happened when they were supposed to and that although the motions for the installation of electricity had started, he probably wondered when this would actually happen. According to Sir Probyn’s book Historic Basseterre electricity became available in 1928 – five years later. It is evident from the item in the Government Gazette attached here that subscriptions to the new amenity were slow in coming and that the plant was being run at a loss. Almost 100 years later, with every household using it, electricity is still heavily subsidised. 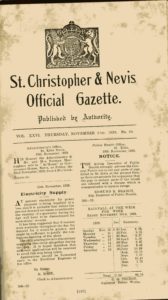