In 1834, the enslaved populations in the British Empire were emancipated.  For many it was the beginning of Apprenticeship.  The planters of Antigua chose to go straight into freedom.  Lord Romney, a planter with property in St. Kitts, had expressed similar intentions.  In St. Kitts the institution of Apprenticeship caused serious unrest and labour disturbances during the first two weeks of August 1834.  Some Kittitian apprentices thought that full freedom had been granted but was being withheld.  The planters and the Administration feared that many would swell the numbers of the group of runaways that had Marcus of the Woods as its leader.   This document taken from the Governor’s  correspondence at the time,  is a list of those tried by Court Martial after  these disturbances.  Seven men and a woman were sentenced to banishment for life.  The sentences of Belinda, Abraham and William Challenger were disallowed.  Bronte, John Dickenson, Cork, Henry and Teague were deported.

The five deportees were between 20 and 24 years of age.  They were sent to the hulk station of Bermuda.  They were among the 9000 prisoners sent to build the Bermuda Dockyard between 1823 and 1863.  Because there was no room in which to house these prisoners on the island, hulks – decommissioned ships – were used.  The conditions were squalid.  Cork died in 1838. John Dickenson was placed on the Leviathan on the Thames, in England and in 1839 he was sent with a group of prisoners to Van Diemen island.

Governor Sir Murray McGregor , who had been serving in the Leewards at the time of the Court Martial  was never entirely comfortable with its decisions.  He felt that there had been an overreaction.  In 1840 while still serving as Governor to the Windwards, he wrote requesting a Royal Pardon for the five men.  This was granted.  John Dickenson who, by then, was serving on the Canton received his pardon in 1849.  It is not known what became of Bronte, Teague and Henry. 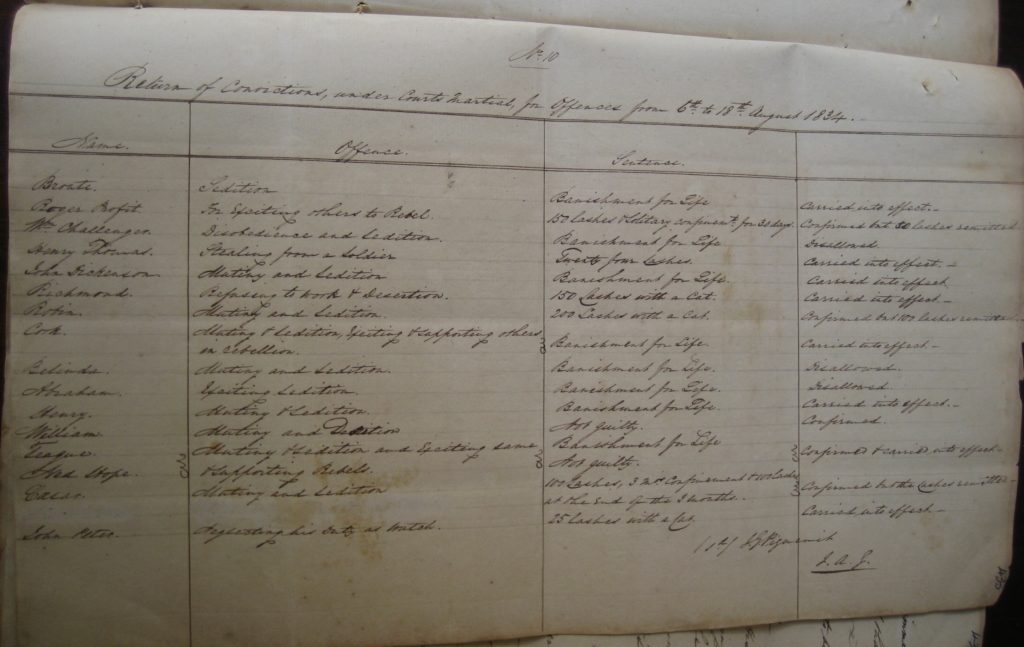 (Special thanks to Sheri Cooper who sent us copies and links to the documentation that helped us put together this story.)