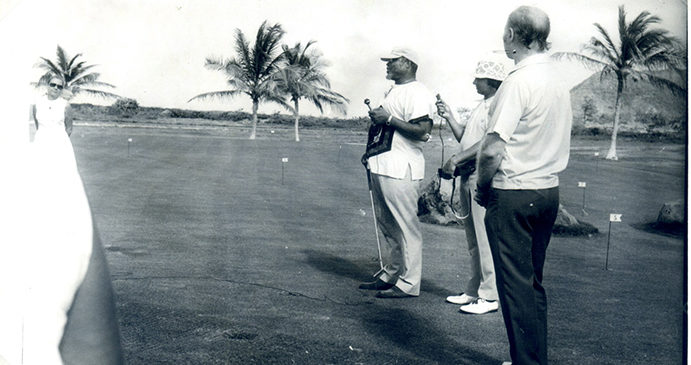 1976 saw the culmination of a very ambitious plan conceived by C A Paul Southwell, then Deputy Premier and Minister of Trade, Development, Industry and Tourism,  to create a tourist resort in Frigate Bay.  Plans had been in motion since the 1960s.  The entire area had the property of the Wigley family and was used for grazing  cattle.  The picking of salt was carried out at the pond.  Access to the estate was through a gate which was usually kept closed.  The negotiations were long and sometimes frustrating, perhaps a preview of the aggravating  political challenges that made the development of the resort so exasperatingly slow.

In November 1973 the foundation stone for a new Royal St. Kitts Hotel was laid and this was opened in February 1976.  On May 1st 1976, the 18 hole Royal t. Kitts Golf Course was opened.  Attending the ceremony were golfers from the Golden Rock Club and leading golfer SookyMaharaj of Trinidad.   Deputy Premier Southwell expressed the hope that there would be cooperation between the two golf clubs and acknowledged the leading roles played by Reg Oldham, Manager of the Frigate Bay Corporations, the British construction company Higgs and Hill and the local labour force that had worked under their supervision.  Deputy Premier Southwell then took a long shot and invited the audience to play.  The course continues to be one of the best in the Caribbean.