Before Shell and Sol

National Archives St. Kitts & Nevis > Gems of the Archives > Before Shell and Sol

Before there was Shell and Sol, there was Fort Pine. Our image today shows what remained of the small military installation in the mid-1940s. In the background there are the nets of fishermen.

In 1853, the British military decommissioned Brimstone Hill and Charles Fort and the ordinance was offered to the island government. Soon after, it was decided that shipping in Basseterre had to be protected. Fort Thomas or Bluff Point at the western end of the Basseterre Bay and Fort Tyson at the eastern end were to be strengthened and a small fort was to be placed between them. Fort Londonderry was in poor condition and too close to the buildings in town to be revived. The new fort was built in 1866. It was named after the Lt Gov, later Governor Benjamin Pine.

As the photograph shows, its life was not a long one. In 1945 Shell in Port of Spain contacted the government of St. Kitts regarding the siting of oil installations. They wanted an area of 200′ by 200′ that offered safe approach and anchorage, good road access and that was close of town and their agents. The installation was to be used jointly by Shell and Esso. Mr. A. Medwin. Town Planning Advisor with the Colonial Development and Welfare office in Barbados felt that the site was too close and to the windward of housing area and would constitute a danger and a nuisance. He also pointed out that the area was traditionally used for boat building and the launching of fishing boats.

Opinion was split as to the suitability of the site but then Shell succinctly noted that the Town Planner’s advice would make the installation uneconomical in St. Kitts and that they might have to abandon the project. They also pointed out that the installation would ensure adequate supplies of petroleum, eliminate drums which constituted a fire hazard, ensure a more efficient and less costly distribution system which will result in diminished costs for the consumer. A letter of the 18th November 1946, from Acting Administrator Harford finally confirmed that the government was willing to lease the land at Fort Pine to the Petroleum Marketing company (West Indies) Ltd The lease took effect on the 1 January 1948. 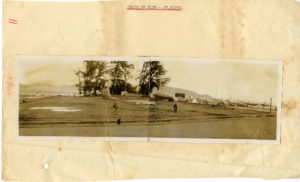