In a year that has been good to us where hurricanes are concerned, let us not forget the devastation that they cause. Perhaps we should also note the difficulties arising out of their complete absence as well!!!

Our photograph today was taken in 1924. We used the original negative which survived to make the print that we are sharing today.

A hurricane hit St. Kitts and Nevis on the 28th and 29th August 1924, causing major destruction. They were not named in those days. Many small houses were lost or damaged. Mud and water filled the cellars of those buildings that had one and mud and debris covered the streets and especially the Bay Front. In the London Electric Theatre, the movie theatre of the time the seats in the “pit” and “circle” were submerged under water. The sugar factory lost an engine house. Most of the lighters were destroyed and crews lost at sea. The water conduit from Old Road to Basseterre was damaged in six places. People immediately started drawing water from the fountain in the Square and at the Berkeley Memorial in the Circus but both supplies were soon exhausted. To minimise the discomfort to the population in town, the Sugar factory connected its supply from Green Hill to the town’s water main.

The recovery effort got under way soon after the passage of the storm. Gangs of labourers were employed to clear mud and sand and restore the streets. The men were paid 1 shilling and sixpence per day and the women received 1 shilling. After the first week the payroll amounted to £500. It was estimated that the work could continue for three months. Despite the severe damage, the water supply to Basseterre was turned on in under a week.

Damage in neighbouring Montserrat and the British Virgin Islands was more severe and there was significant loss of life. 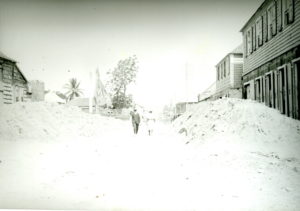