In 1890 Charles Henry Boon of “The Cottage”, Basseterre started a small publication called The Lazaretto. It came out every two weeks and consisted of 8 pages measuring 13 inches by 8 inches. A lazaretto was a place of isolation and quarantine and Boon had made it his mission to get lepers off the streets of Basseterre, actually off every street on St. Kitts and Nevis

At the time, the nature of the disease was not well understood and people with severe rashes may have been diagnosed with it. People suspected of suffering from the disease were supposed to be housed in a place not very far from the old Cunningham Hospital (now the C.F. Bryant College) but they seemed to have had the run of the place.

The Town Constable was given instruction to enforce the law prohibiting lepers from entering the Market, he was successfully most of the time but one day a group forced their way in and dared him to eject them from the place knowing full well that he would not handle them. The Lazaretto carried other stories on the same theme. The owner of the field next to the Home complained continuously of the damage the patients caused to his canes but despite reprimands they continued to raid the field because they knew that nobody was going to put them in jail. There was also a certain recklessness in the community. Boon wrote of owners of cattle who let men who had been diagnosed with leprosy milk their cows and then sold the milk to their customers, and of a doctor in Nevis who still dressed wounds even though he himself was a leper. It was this sort of perceived careless behaviour that set Boon on his self-assigned task.

C. H. Boon was also the owner of a business called the St. Kitts Foundry and he had a great deal on interest in machinery. Because of this he also published updates on technical developments in the sugar industry around the world in his paper. 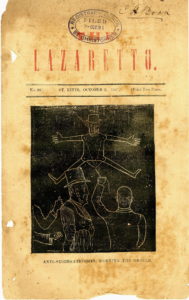