Last month during our Exploring Kittitian History course at the Open Campus, we mentioned cassava. While searching for images for another project, I came across this postcard of a cassava mill. This starchy root crop was a staple in the diet of the Kalinago but it also became an important element in the diet of the enslaved people. Christopher Jeafferson who came to St. Kitts to claim ownership of his father’s plantation at Wingfield in 1676 mentions Indian provisions which included cassava.

In 1680 following a hurricane he wrote, “got up a little house, in which to secure myself and the best of my goods from the wet, and I used all diligence to get up a couple of rooms and one of my sugar works and to put some Indian provisions in the ground having 32 negroes, besides whites to feed every day (for which I bless God)”

Two years later, after he returned to England he wrote to his manger giving him instructions to “Be sure to put in provisions enough. And remember that November and December are the chief months in the year to plant Indian provisions, and to keep the provision ground full by planting as you dig and draw, because when the dry weather season falls in you will have several months in which you cannot put in any provisions.”

Cassava would have been sold by the enslaved in their markets along with other provisions that they would have cultivated in the grounds allotted to them.

We would love to hear from you about the various ways that you know of or remember for using cassava. 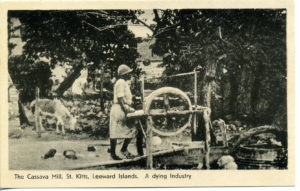