At the beginning of the 20th century, rudimentary health practices were having a serious effect on the survival of new born babies. St. Kitts actually had one of the highest infant mortality rates in the Caribbean, possible the world. In 1913 the Health report had to concede that this was “generally admitted to be one of the more serious blots on our records.” Nanas delivered babies at home. These women would have learnt their skill from other women in their family by accompanying them to deliveries. In a leaflet about nursing, Bronte Welch, herself a Public Health nurse wrote that Nanas drank alcohol and encouraged their patients to do so as pain killers. This often resulted in post partum hemorrhage. They used kitchen cobwebs to dress the umbilical cord instead of sterilized starch often causing tetanus in the baby. In 1915 an ordinance was passed requiring that persons wanting to practice as midwives should be licensed. In 1919 another more detailed Ordinance to regulate the practice of Midwifery was passed.
A Midwifery Board was created. Members had to hold a certificate of the Central Midwives Board of England or be a midwife registered under the ordinance. The Senior Medical Officer and the Inspector of Public Health were ex officio members. The Board was to keep a register of midwives. The Ordinance and accompanying regulations were very detailed going as far as to specify what was to be kept in in the midwives professional bag. It was a very clear attempt to regulate the profession in St. Kitts, Nevis and Anguilla and to save the lives of new borns. Our item today is the first register of Midwives as published in in the Official Gazette 1920. It should be noted that among the women was Katherine Burdon who was the wife of the Administrator. She took a very active role in attempting to ensure that children were born into healthy environment 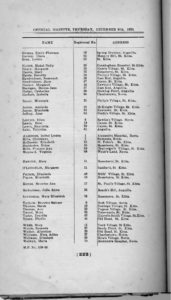 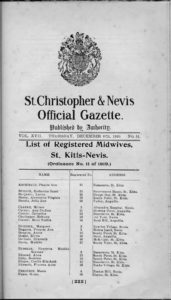