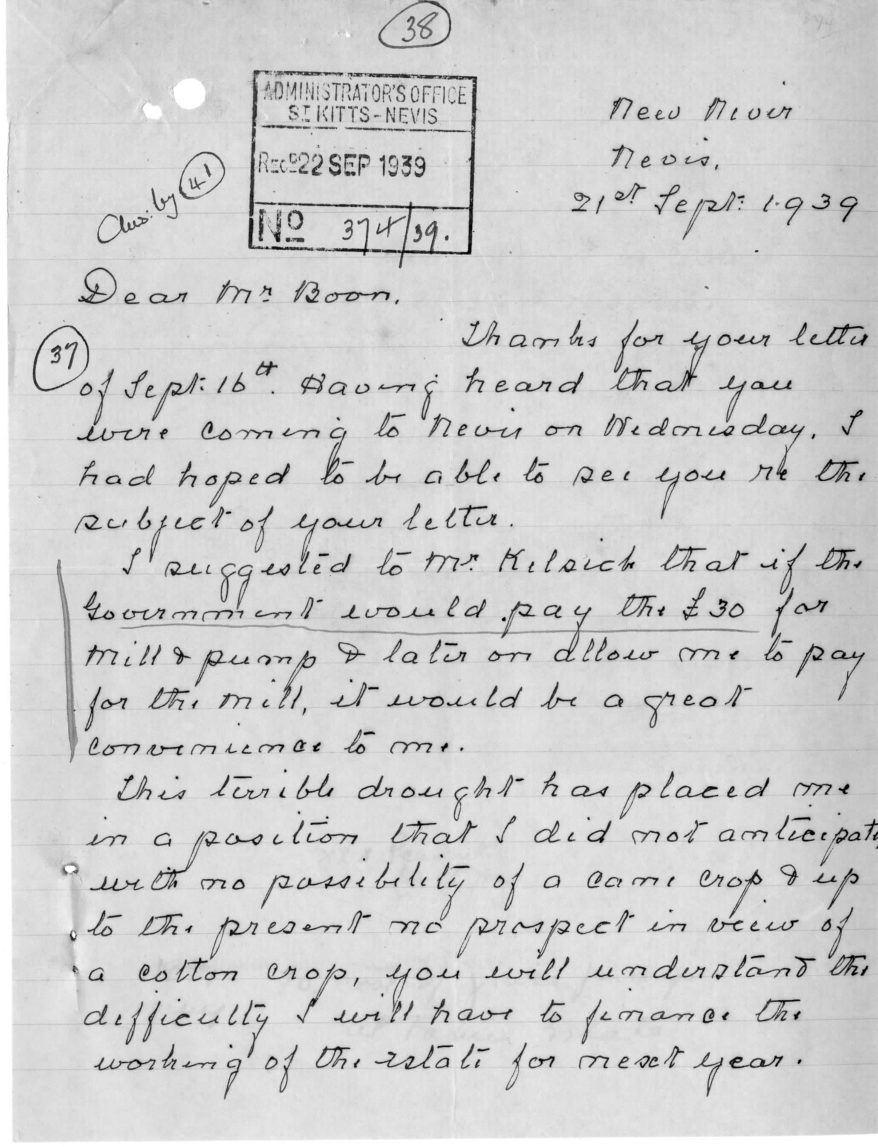 Our item today was chosen because it shows an entrepreneur trying to save his business and the difficulties he faced.  The story that goes with the document high lights the need for careful research and planning and how decisions made on impulse often lead to poor results.   Here is some of the background to document.

For some years Nevis had been dealing with cotton crop failures.  At its general meeting of the 10 March  1939, the Nevis Agricultural and Commercial Society decided on a ‘back to cane’ policy as  the best way out of difficulties.   Pasture and cotton lands were to be put under cane despite the fact that Kittitian planters had been increasing their yield for some years.The NACS wrote to the Governor asking for a revision of the export quota making provision for 4000 tons of sugar from Nevis or to have the 4000 tons included in the quota already  allowed to  St. Kitts.  They also asked that the Basseterre Sugar Factory contracted with Nevisian growers to take a certain amount of canes from them.  They also requested assistance from the government to defray 50% of transportation cost.

The  governor through his clerk replied that special legislation taking the quota into account was to be considered soon and the Nevis case would figure in that.  Regarding transpiration, he said that  improvements had already been made and no further reductions were likely.

The Commissioner of Agriculture supported the idea of Nevis producing cane syrup and fancy molasses so that the canes would not have to be shipped to St. Kitts.  Syrup production was to take place at Hamilton Estate but the machinery there needed upgrading.   New River Estate where muscovado was produced was also under consideration for this development. The sugar technologist who visited both sites found them inadequate for the job and suggested that if an assured market could be found for Nevis then a modern factory costing about £10,000 to £15,000 should be considered. However because of the uncertainties of the market, the colonial administration, was not prepared to give this much consideration at the time.  The Commissioner of Agriculture felt that the use of machinery that could be obtained locally would be a good interim solution.

The Acting Administrator Herbert Boon received a commitment from  the Boston Molasses Company to take 3000 barrels of molasses produced in Nevis, provided that  the quality was acceptable.  The Council approved expenditure for improvements.   Hamilton was to receive a  grant and W S Maynard, the owner of New River, was to be provided with a loan on easy terms. Government bought the Fahie pump from Joseph Ferara which was to be used at Hamilton.  Maynard decided to buy the Fahie mill.  The asking  price was high and negotiations failed.

The outbreak of World War 2 and a serious drought meant that Hamilton Estate could not meet the needs of the American company.