On the first of March 1940 the Executive Council approved a scheme similar to the Grammar school by which promising female students were given scholarships. Four were to be awarded in May of that year and another four in January 1941. On being informed, Principal Pickard, was elated but suggested that 2 be offered in January 1941 and the remaining two in January 1942 “to distribute the scholarships among children of more varied ages”. Her proposal was accepted The first 4 to receive these scholarships were Marguerite Mitchel who was attending the school, Dora Harper and Lena Herelle from Miss Sprott’s School and Ellen Francis from St. Paul’s

Following an exam for scholarship in October 1943, Miss Pickard expressed disappointment in these words, “I wish to put on record the fact that the above examination – certainly no more difficult than previous ones – has indicated to us in no uncertain way the crying need for more and better education in this island .” That year out of 21 children taking the exam only three scored more than 60%. It was probably as a result of this that at the end of the Christmas term of 1943 and again in 1944 she submitted a number of report cards. It might be worth pointing out that besides academic awards there were awards for needlework and acting indicating the importance of a well rounded education.

So as not to cause damage to an already battered file we chose to share two reports that were easy to access. 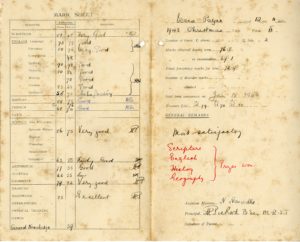