Sir
I have the honour of forward to Your Excellency a duplicate original of the examination of witnesses in support of a charge against Reid Gumbs an inhabitant of that part of St. Martin under Your Excellency’s command.

Your Excellency will perceive by the evidence given upon oath in the formal judicial proceedings that Reid Gumbs stands charged with a crime that by British Law is viewed as one of great magnitude, which by our code is treated as piracy, robbery and felony and to which is annexed the penalty of death and the forfeiture of lands and goods.

In the present stage of this matter the principal point that arises is the right of Henry Gumbs to the restoration of his freedom as a British subject of which freedom he had been feloniously and piratically deprived by the act of Reid Gumbs.

Passing over for the present all considerations connected with the act of Reid Gumbs, it now becomes my paramount duty as Her Majesty’s representative in this portion of Her Dominions most respectfully and at the same time most earnestly request that Your Excellency as Commandant of St. Martins will be pleased with least possible delay to take measures for the immediate restoration of Henry Gumbs to the full enjoyment of his liberty as a British subject.

In order that no time may be lost in attaining an object which cannot fail to be regarded with the deepest interest by the British Government, I have dispatched Captn Caddy a stipendiary magistrate of this island to St. Martins to wait upon Your Excellency and present this letter. Captain Caddy has been likewise instructed to receive from Your Excellency possession of Henry Gumbs and to bring him to this island from whence he has been unlawfully removed against his consent.
I have etc
C J Cunningham
Lt Gov

To His Excellency
Monsieur Forjet
Commandant
Etc etc
St. Martin
Henry Gumbs was enslaved to Reid Gumbs of French St. Martin. Reid Gumbs had a sloop called Good Intentions which he used to carry cargo, mostly livestock between the islands. Henry often sailed with him. For some reason which is never made clear, Henry decided not to return to St. Martin with Reid Gumbs. Instead he stayed in St. Kitts and then headed to Nevis from where he intended to make his way down to Trinidad. Reid Gumbs returned to St. Kitts with his other young deck hand Lovelace Wynham, the brother of his mistress in St. Martin. Reid Gumbs sold some of his livestock to Henry Wilkenson who told him that he could not pay him that day but that he would have the money for him on the morrow. Reid Gumbs also purchased a number of items from George Colly and was to pick them up the next day. That evening Lovelace found Henry and persuaded him to sleep on the sloop with him as he was afraid of being on his own. That night the sloop left St. Kitts and Catherine Gumbs, Henry’s sister and other witnesses said that Reid Gumbs left behind his trunk and his shoes and the cable to the boat had been cut.

Lt Governor Cunningham demanded the return of Henry as he considered him a British subject and in his letter to the officials in St. Martin, he claimed that Gumbs’ actions amounted to piracy, and robbery punishable by death. The official in St. Martin communicated what had been given in evidence to his superior in Guadeloupe who did not hand over Henry but instead said that the matter should be laid before the authorities in France. Sir Charles FitzRoy, Governor of the Leewards in Antigua in forwarding the documentation to Lord Stanley, the Secretary of State for the Colonies, had to admit that the case against Reid Gumbs was “essentially defective.”

The evidence against Gumbs seems to be based on his hurried departure from St. Kitts. There is nothing to explain how Henry Gumbs came to be considered a British subject. May be the fact that he had run away in St. Kitts gave him certain rights at the time. This incident is an indication of the confusion created in the region by the various laws regarding enslavement and the readiness of enslaved to take advantage of such situations. Both Catherine and Henry took advantage of the fact that Emancipation had been declared in the British islands. She ran off to Anguilla and then to St. Kitts and he came to St. Kitts and stayed. Henry also intended to take advantage of the higher wages being paid in Trinidad at the time. 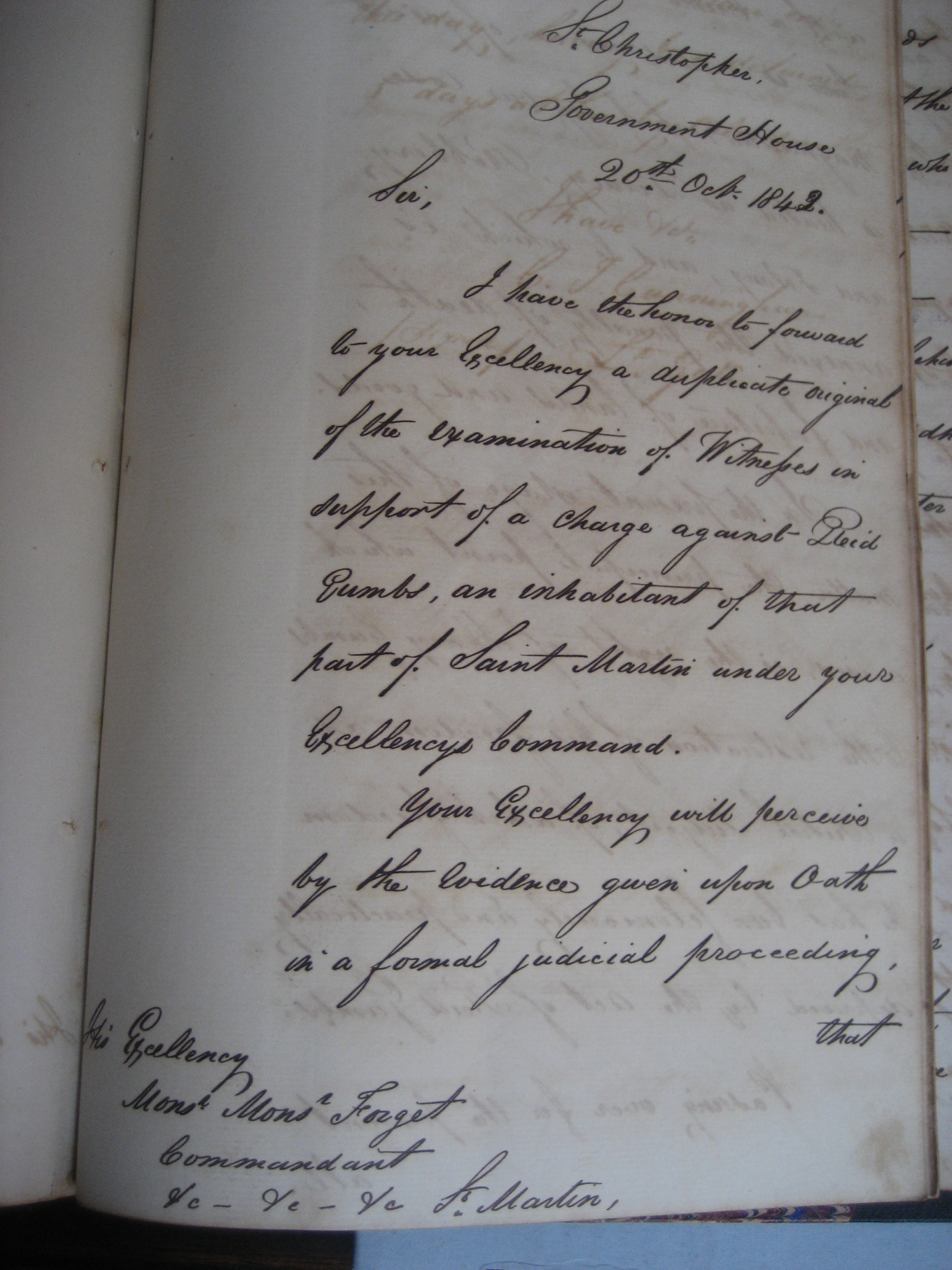