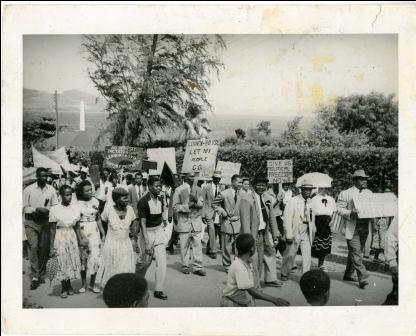 We are coming up to the weekend before Labour Day.  The first Labour Day celebrations commemorated the workers’ demonstrations in 1886 in Chicago.  They were demanding an 8 hour day.  It became recognized as an annual event by the Second Socialist International held in Paris in  1869.  In St. Kitts, the Trades and Labour Union and the Workers League first celebrated the event in 1955 and the Union Messenger described it as “a moderate success.”

The image we are sharing today may have been of that first Labour Day in Basseterre but we are inclined to think that it is of a demonstration that took place in June 1958 advocating for constitutional reform.  It is the earliest image of a demonstration in our collection.  Clearly visible are C A P Southwell, J N France, F T Williams, A Eddy.  When Austin Eddy saw the image some years ago, he said that R L Bradshaw was the man holding up the poster saying “Give us political freedom now.”  However, it is also possible that Bradshaw might have been in Trinidad at the West Indies Federation at the time.  The other readable poster in the image, mentions Lennox-Boyd.  Alan Lennox-Boyd was the Secretary of State for the Colonies and as such held a great deal of power over Colonial matters.  However by  the 1950s the move towards democratising the Empire was well underway.

By 1958, St. Kitts-Nevis-Anguilla had achieved Universal Suffrage (1952) and had a ministerial system of Government (1956).This system placed the responsibility for a particular area of administration in the hands of a person elected by the people. The first to hold these ministries were

The Governor and the Executive Council could still overrule their decisions.   The demonstration was expressing a desire for self-Government.  They wanted a a Premier who presided over a Cabinet that was collectively responsible for the actions of individual ministers in the execution of their work.  This was eventually achieved through the Statehood Constitution of 1967 which gave the state of  St. Kitts-Nevis-Anguilla internal self-government.