In 1900 the manager of Estridge estate wrote to the owner of the estate H W Estridge who lived at Malmesbury, Wiltshire in England explaining how he was dealing with a grasshopper problem on the estate.  The letter from Estridge to the Secretary of State of the Colonies does not  say if this was a problem through out the island or in that particular area.

The solution – paying children to catch grasshoppers – raises a number of questions.  Were these children kept away from school to do this?  Were they considered part of the notorious “small gang”?  Was the wage a fair one or one that took advantage of the fact that children were being employed?  J N France wrote about the small gang in his series of articles entitled “The Working Struggles of half a century.”  He noted the hostility of planters towards estate workers who did not make their children available to work on the estate.

With regards to the solution, the West India Committee in London suggested that the bird known as the “Mina” or Indian Starling, a natural predator of the grasshopper should be introduced into St. Kitts to keep the grasshopper populations in check.

It is clear from the letter that Estridge was an absentee owner and that his estate like others was experiencing the difficulties of surviving the ups and downs of the sugar industry.  He seems to have coped  fairly well up to that point.  One wonders though, at what cost?  His letter also shows that he had a spent time in Bechuanaland, now part of South Africa.  At the time the Boers were showing an interest in the area.  It is not clear if he was there on military service or because of other reasons.   He certainly seems to have had a great deal of interest in botany and was the author of Six years in the Seychelles(1885) which indicates that he had traveled in the Indian Ocean and along the Eastern Coast of Africa.

I have been enjoying your series on the Gems from the Archives.  I
can give you some information on H W Estridge Gem 40 because he is
listed in the 1901 Census in Minety:

Described as “Living on own means”

He is living there with his wife, mother-in-law at Minety House (he was
also there in the 1895 Census).  Two children are visiting with their
governess.  MrsEstridge had a live in Lady’s Maid and there is a Cook,
House Maid and a Parlour Maid.

He died not long after on 15th January 1902.  His probate declaration
shows that he was worth £17,476. Not a very rich man by the standards
of those days. 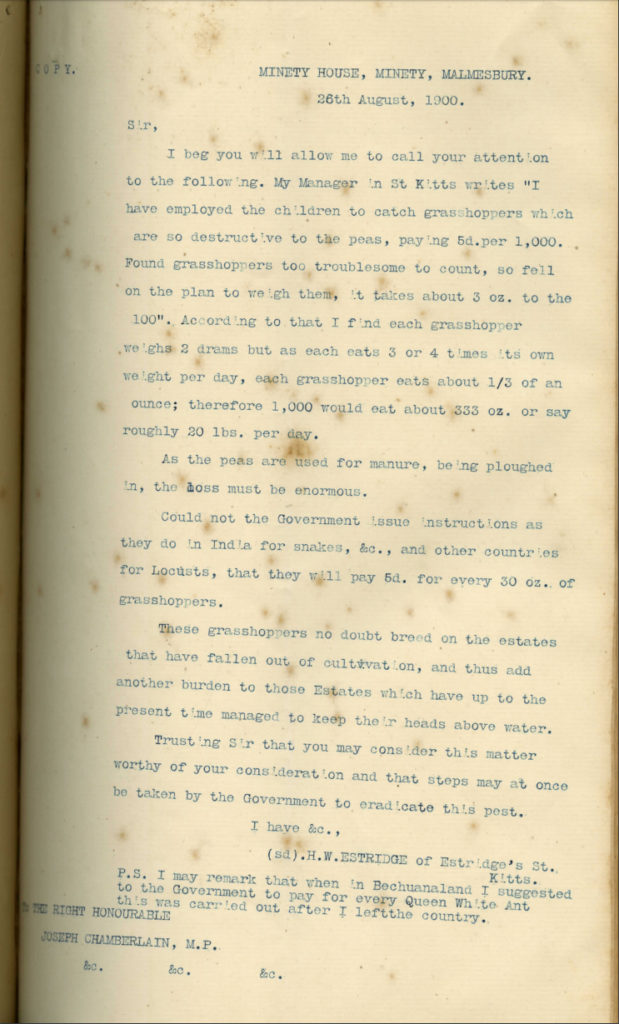