It’s Christmas time again so we went in search of an item that represents the season. There were a few but we decided to share this image – a young Basil Henderson, surrounded by children who were waiting to have their little chat with Santa Claus. The little girl in the front, seemed more apprehensive than intrigued, probably because of the strange mask that Santa was wearing!!!
Henderson was the person who introduced the lighting of a Christmas tree in the Square and the distribution of gifts to children by Santa. He was an energetic social worker who started the Easter Aquatic Sports in 1951 and Carnival in 1957. This image probably dates to that period. He was also the local 4H Club organizer, secretary of the Steel Band Association, and avid sportsman and a very active member of the Catholic Church. 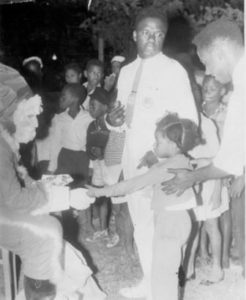