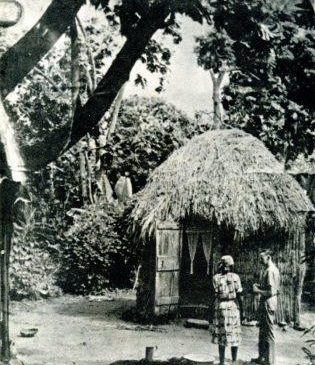 This image of a trash hut survives in the National Archives as a print not as a photograph.  The original was taken in 1955 probably by a British Development Agency.  This means that there are still some people around who remember these structures.  Earlier these huts were the order of the day.  They consisted of either one or two rooms, mostly used as sleeping space, although some had a seating area.  All the other family activities took place in the yard that surrounded it.  This yard may even have included a small cultivated patch.

The problem with these structures was the danger of fire.  Cooking took place on coal pots in the yard, so this was a fairly safe activity but there was no electricity so people used candles and kerosene lamps after dark.  In the small space of the house they could be knocked down quite easily.  They could even  burn a curtain that was blown too close to the fire by the breeze.  Most times candles and lamps were extinguished before the family fell asleep but sometimes they were forgotten and then accidents happened.

The problem with improving housing was that it required land for a development but land in St. Kitts was mostly part of privately owned estates.  The British Administration started working on improving housing within Basseterre by acquiring land that eventually became Haynes Smith and St. Johnston Village.  However progress was slow

For the planters, these huts presented a danger as any fire that started in them could easily spread into the cane fields  that were awaiting harvesting.  Their workers lived in them.  They might have owned their hut  but the land it was on belonged to the estate so no substantial structures could be erected.

During the 1950s a ministerial system of government was introduced.  Ministers often complained that they could get very little done as they had limited power and their recommendations still had to go before the Executive Council in which they were a minority.  However that did not stop them, as members of the Workers League, from working on the elimination of slum areas in Basseterre  and improving housing in the country side.  Projects such as Conaree and Saddlers were realized at this time.