In the early 20th Century, St. Kitts had one of the worst infant mortality rates in the Caribbean and probably in the world.  Although the main culprit seems to have been malnutrition conditions of delivery may have had some serious implications as well.  For most women, this was mostly in the hands of Nanas who learnt their skills by trial and error.  The Colonial Administration attempted to control this group of people.  It was insisted that they should be licensed following  six months training  at the Cunningham Hospital.  They received no training in general nursing.

Ordinance 11 of 1919 regulated the practice of midwifery in St. Kitts, Nevis and Anguilla.  It provided for the creation of a board  of five persons.  The Senior Medical officer and the Inspector of Public Health were ex-officio members of it.  One person on the board had to hold a certificate of the Central Midwives Board of England or be a midwife registered under this ordinance.  Persons who could register to be midwives were women

Midwives who had shown themselves to be incompetent or negligent, who had failed to satisfy the board of her capabilities, who had been convicted of a felony or misdemeanor, who was of bad character or who was unfit due to age or infirmity to discharge duties were to be removed from the register.

Our gem today is the list of women who were approved to practice in 1919 as published in the Official Gazette. 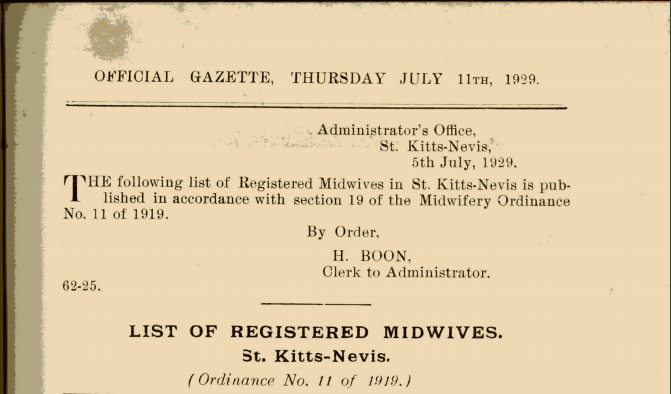