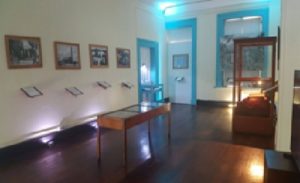 (The St. Christopher National Trust) February 20, 2018: The original, handwritten Act for the Abolition of Slavery – The Emancipation Act – is now on exhibit at the National Museum.

The Exhibition, hosted in collaboration with the National Archives, opened with a media event on Friday, February 16th. The new exhibit is being mounted as part of History and Heritage Month, which this year has as its theme, “History and Heritage: A Conduit to “Full” Emancipation.”

In keeping with the theme, the Archives agreed to collaborate with the National Trust to mount the exhibit, which looks at the first 100 years following Emancipation.

On the 1st August 1834 enslaved people in the British Empire were legally freed when the Act for the Abolition of Slavery came into effect.

The Act was passed in the British Parliament in 1833, to come into effect in 1834, however each colony was expected to work out the details locally. It was to be accompanied by a number of Acts on the duties of the special magistrates, the designations and duties of the apprentices and the responsibilities of the employers.

In July 1834, St. Kitts became the first colony to pass adequate legislation to support the Act that was passed in England.

In addition to the Act for the Abolition of Slavery, the Archives has provided digitized copies of the accompanying legislation that are available for viewing.

“We are trying to explore the 19th century,” said Director of the National Archives Victoria O’Flaherty, speaking at the media event on Friday.

“In our history books especially in St. Kitts, we tend to jump from Emancipation to the launch of the labour movement. 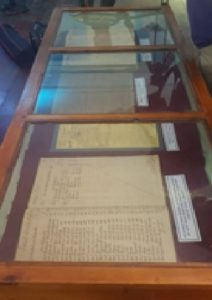 It’s a big gap, and the labour movement could not have happened without what was going on in that period, and it’s time we learned about it.”

Included in the exhibit are original copies of four other related documents, including the controversial The Masters and Servants Act. Also on display are a copy of the text of the Emancipation Proclamation and a compensation claim made by a former enslaver, for the loss of his ‘property.’

“The whole purpose of this exhibition is to fill in some of the information that’s missing,” Mrs. O’Flaherty said. National Trust Patron the Governor General Sir S.W. Tapley Seaton GCMG, CVO, QC, JP speaking at the event, made a special appeal to the public to support the National Trust and its events.

“The St. Christopher National Trust, continuing its mission of preserving our heritage and informing the people of this country of our heritage, appeals to everyone…to be as generous as you can, to be as forthcoming as you can,” Mr. Warner said.

The Museum is offering a special weekend admission for nationals and residents.