On the 28th July 1914 almost 100 years ago to the day, the First World War got underway.  It was during its military campaigns that airplanes were first used as weapons.

On the 13th July 1914 the Aerial Navigation Ordinance was published and became law in St. Kitts-Nevis-Anguilla.  The law was designed to protect the public from the dangers pose by airplanes.  It was only in 1903 that the Wright Brothers had flown their powered airplane at Kill Devil Hills in North Caroline.  The flight had lasted 59 seconds and covered 852 feet.  Two years later the brothers had the world’s first practical airplane.  Progress continued to be made and in 1910 the first take off from a ship took place and in the following year the first landing on a ship was achieved.  In 1912 the British company Vickers was experimenting with machine guns on planes.

In 1914 Europe was heading towards war and the dangers of the new machinery to the general population were quickly recognized.  As long as wars were fought on battlefields, only soldiers were in danger of getting killed but when weaponry took flight there was no telling who could be shot at.   As Europe headed towards a conflagration, the colonial authorities in St. Kitts attempted to put laws in place to minimize the danger posed by armed flight.  Restricted areas were to be set out and a plane could be shot down if its pilot did not comply with regulations..

Most of the fighting of the war took place in the trenches of Europe.  Airplanes were used mostly  for reconnaissance.  Gradually the use of weapons in planes was introduced.  Pilots used grenades, pistols and rifles.  The first machine gun was used by a French pilot against a German plane on the 5th October 1915.  Flight weaponry continued to become more destructive as the war progressed. 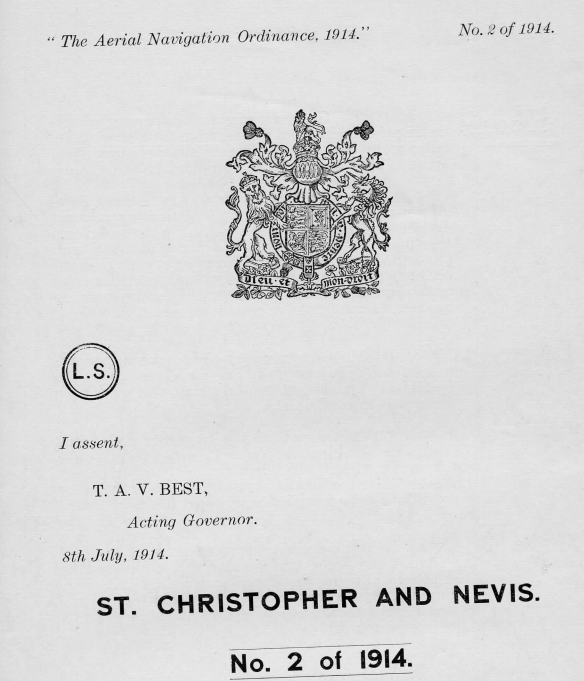