NATIONAL ARCHIVES NOT ONLY LAUNCHES WEBSITE, BUT LAUNCHES LASTING MEMORIES AND ASPECTS OF HISTORY 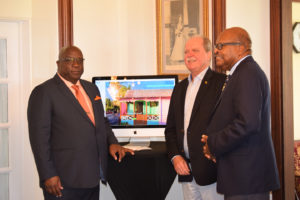 “I think it is very useful to have all this information and I think what Mrs. O’Flaherty has done through her tireless efforts will pay dividends in terms of our students being able to understand where they’ve come from, where they are and where they’re going,” said the governor general, speaking at the launching ceremony on May 25 at Government House.

Sir Tapley especially commended Mrs. O’Flaherty for her hard work and dedication to the National Archives and to the website.

“She has taken on the archives and has sought to transform them into something more meaningful than just a stale list of books and documents. She has brought them to life,” he said.

Also speaking at the event was Prime Minister and Minister responsible for the National Archives, Dr. the Honourable Timothy Harris. He said that the National Archives plays a critical role in determining the country’s future by safeguarding “our national and collective consciousness, our volition, as well as our power of agency and perseverance.”

“This is because the National Archives and its stewards protect the nation’s historical record,” said the prime minister. “Today’s launch of the beautiful and impressively thorough website, www.historicstkitts.knfurthers our journey of national pride and expands the scope, reach, impact and importance of our national records.”

The prime minister said that it was important to note that this digital technology brings the national records into quick and easy contact with students and teachers, tourists and prospective visitors, as well as people all around the world who want to trace their ancestry or research the history of the country. “So, I commend those who have created it for the fine job they have done,” he said.

Prime Minister Harris thanked the Government of Germany, in particular His Excellency Ambassador Holger Wilfried Michael, with the consistency of its support to the agenda of the National Archives and national heritage. The Embassy of the Federal Republic of Germany in Port of Spain, Trinidad, contributed generously to the project. Its support made it possible for the National Archives to purchase a large flatbed scanner to be able to scan material, both for the website and for preservation purposes.

Equally commended by the prime minister was the Director of the National Archives, Mrs. Victoria O’Flaherty, and her staff for reaching this milestone. Praises were also given to Genesis Creatives, the local web developer that designed the site.

“This is a good start for us in St. Kitts and Nevis in taking note of our history of recording the elements of our national heritage,” said the prime minister, noting that it is a task that cannot be left alone in the National Archives.

“There is something each of us can do to preserve records- family records, our school records, our community records- that would make the work of the National Archives so much easier and our people better off for having preserved their history so that those of the generation now and to come after them would be better prepared to serve and to build a better St. Kitts and Nevis.”